The strategy tips keep coming, thanks to our Team Ignition poker pros: CrazySixes (Shaundle Pruitt) and God’sBigToe (Jarred Gabin)! These seasoned online poker streaming players have been winning for decades, cashing in big tournaments and stacking up cash from one game to the next.

Now, they’re sharing what they’ve learned in regular poker tutorials that we’re loading up on the Ignition YouTube channel. In a previous episode, we had a “Test Your Poker Skills” quiz scenario with our Ignition streamers. We’re presented with an in game scenario and then the pros break down how to play through it, along with analysis of top options for each round of play. It’s an amazing way to learn how to think through things you’re going to encounter at the poker tables again and again.

This past month, we followed up with our Ignition streamers again, bringing in another solid analysis and poker strategy session.

In our first poker streaming scenario, we’ve got 88 and are first to act in the hand. The big blind is 400, and we bump it to 850. Everyone folds except the small blind, who calls the raise and kicks off a heads up hand. 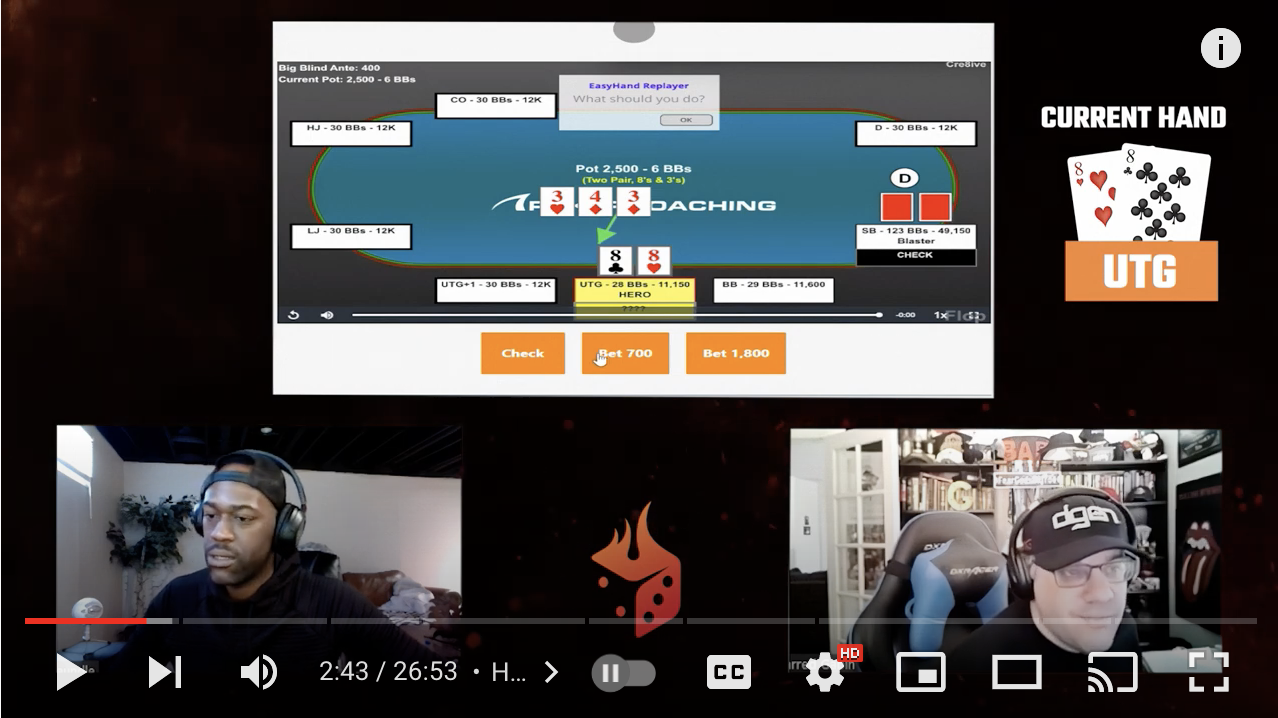 The main idea here is to bet to protect our overpair from flush draws. We don’t want to give the SB pot odds to call with his AdXd, do we? We aren’t super scared of the trips, given the preflop raise that probably cleared out hands with a 3. We want to get value from those diamond flush draws as often as possible, chasing their hand.

We bet 1800 and get called. The turn brings a Kc. The SB checks again.

Do we bet again? Are we scared of the king and need to check? Both options are acceptable, according to the quiz designer. A bet gets value from flush draws. The only king pairing we’re watching out for is KdXd, which are definitely in the range of many opponents.

Sixes says to pot it, thinking that the opponent is capped (the range of hands is probably limited in strength, based on actions in the hand thus far).

According to the coach who made the quiz, 1/3 pot or so is about right. A bigger bet really isn’t going to work out often enough to be worth it.

The SB calls. The river is the 2h. SB checks again.

Was the SB on a small straight draw? Most of the time, not so much. Team Ignition is focused on getting value from Ax4x hands, as well as 55, 66, and 77. Overpairs are less likely. They probably would have been 3 bet on the flop. 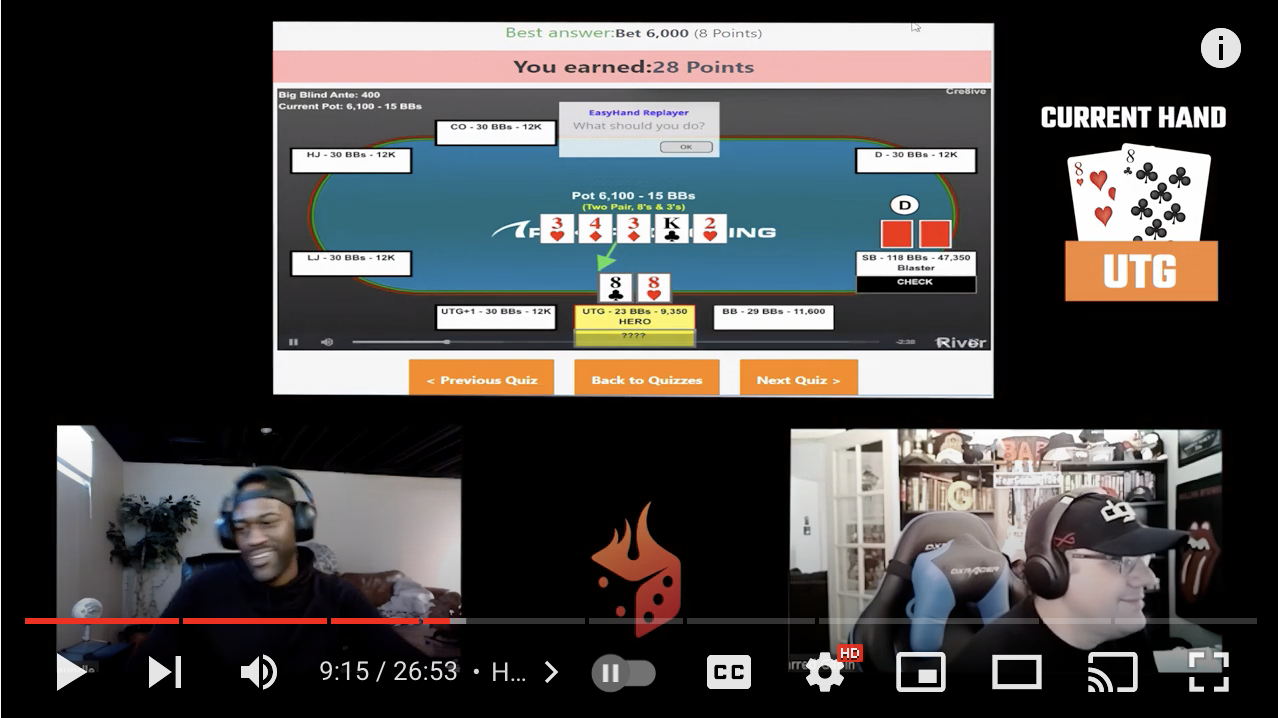 Hands like these often come up in poker tutorials. What do you do with a middling hand when action folds around to you? Well, due to your positional advantage, you generally need to go for the bully play. Raise it up! The example has us tripling the BB, which gets a call from the BB only. 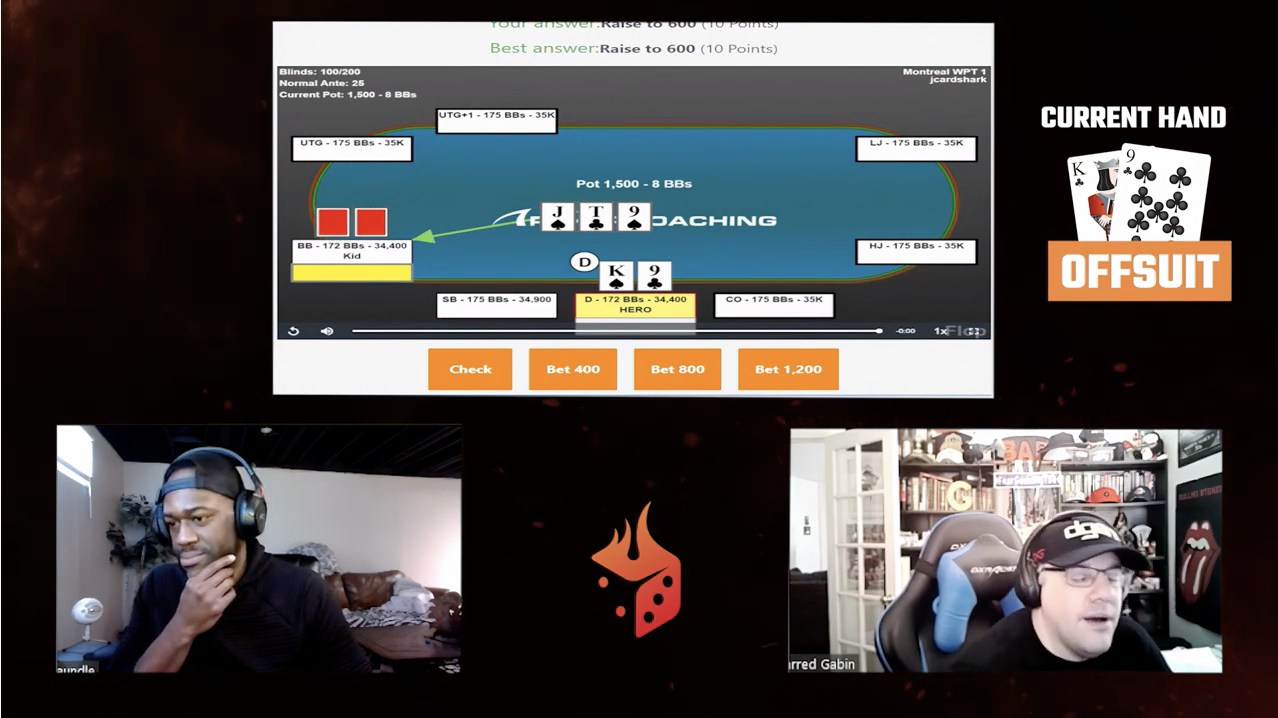 We’ve got bottom pair and backdoor flush and straight draws. The Ignition streamers say that the play is generally to bet, although some checking might be in the cards. There’s also variation in the bet sizes Sixes would use here. Further, he’s ready to call the check raise.

The quiz designer recommends betting decently big if you do it, but in generally to actually favor checking due to the danger of being check raised by strong draws and other hands. He says that if the pot is small due to a lot of checking or a small bet on the way to the river, we probably have the best hand. He still says pricing out marginal hands should be a primary thought.

The turn comes 9h. The opponent checks to us.

Now we generally want to bet to protect our trips and get a fold. So we bet. But the villain check raises us! This is a polarizing range. We may be dead, or the enemy may have premium draws. If we go bigger and re-raise, we’re only getting called by better, and only causing worse to fold – not great poker strategy. We call and move on.

The river comes with an Ac, and the villain checks to us. 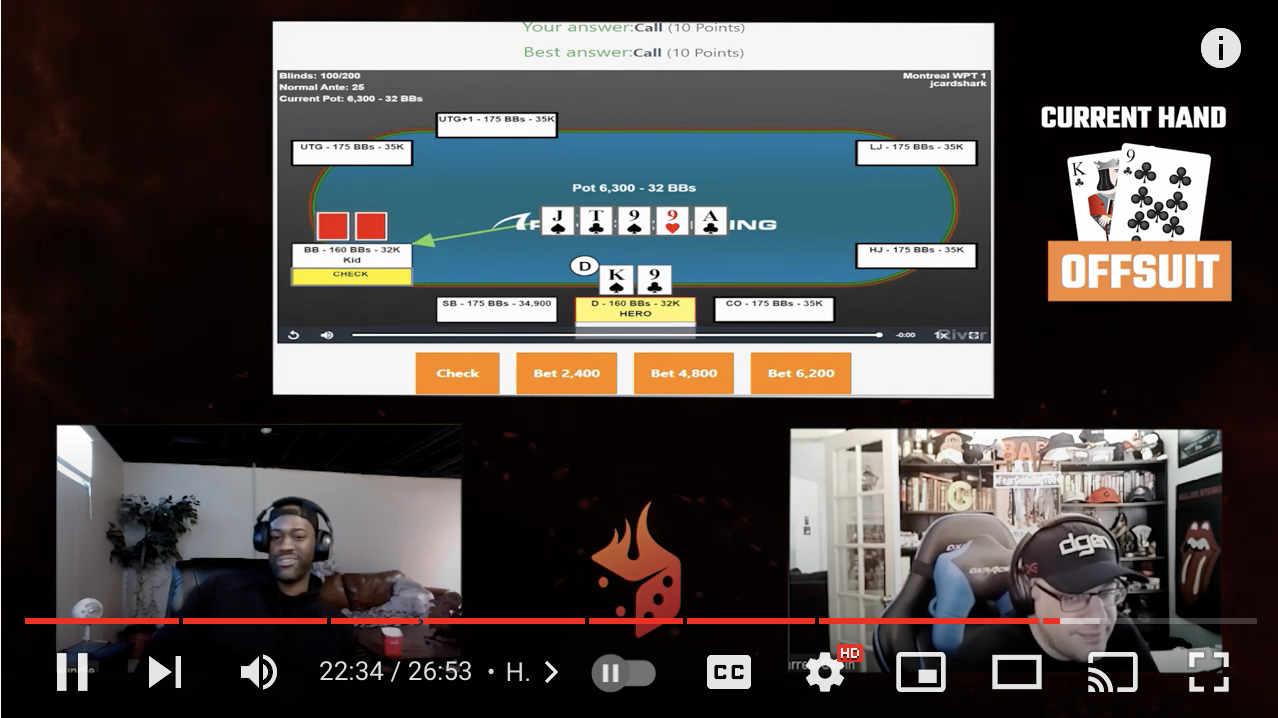 The trips we have are not monstrous, but there’s too much value to be gained by a bet from hands like JT, a worse set, AsXs, and so on. Team Ignition would put in some money, as a matter of poker strategy. When you do this, you need to know if you’re folding to a check raise, which could come twice. It’s not super common, but should be in the back of your mind. Sixes says he’s betting and then folding to an all in check raise from the villain.

The hand went check/check for the final round. The villain turned over Ts8s, revealing open ended straight and flush draws which (sadly for that player), didn’t come. The check raise on the turn was a nice move, but a set of 9s isn’t going to die to it. Had we bet the river, we wouldn’t have gotten called. As a tiny aside, we also would have lost the info on what that player was holding. Not a huge deal, but we’ll take all the wins we can get! Had the villain bet the river, we’re also calling. Trips ain’t trash!

Where do these quizzes come from?

PokerCoaching.com has tons of hand quizzes that you can “play” through along with professional analysis on each of your options. The strongest choices get more points, giving you a score for your answers. You also get plenty of reasoning to go along with each choice in each hand.

You can try it out for free, or upgrade to paid packages, but if you’re wondering where our streamers get these scenarios from, that’s the spot. There’s also coaching classes, courses, challenges, charts, and lots more. Not a bad place to improve your game.

See you next month for more poker strategy!