Everything you need to know about Omaha at Ignition

If you want to learn how to play Omaha and you already know Texas Hold’Em, you’re golden. You’ve just got more cards in hand, but the other rules remain much the same. You’re dealt four hole cards, and the board still has five community cards by the end of a hand. There’s still the same preflop betting, flop, turn, and river. One important note: you must use two cards from your hand, and only two cards. You can’t use all four, no matter how glorious they are.

Ignition games involving Omaha offer tons of variety. There’s so many to try! Let’s talk a little about what’s in store for poker players here.

How to Play Omaha at Ignition

The most basic form of Omaha is Ignition cash games. 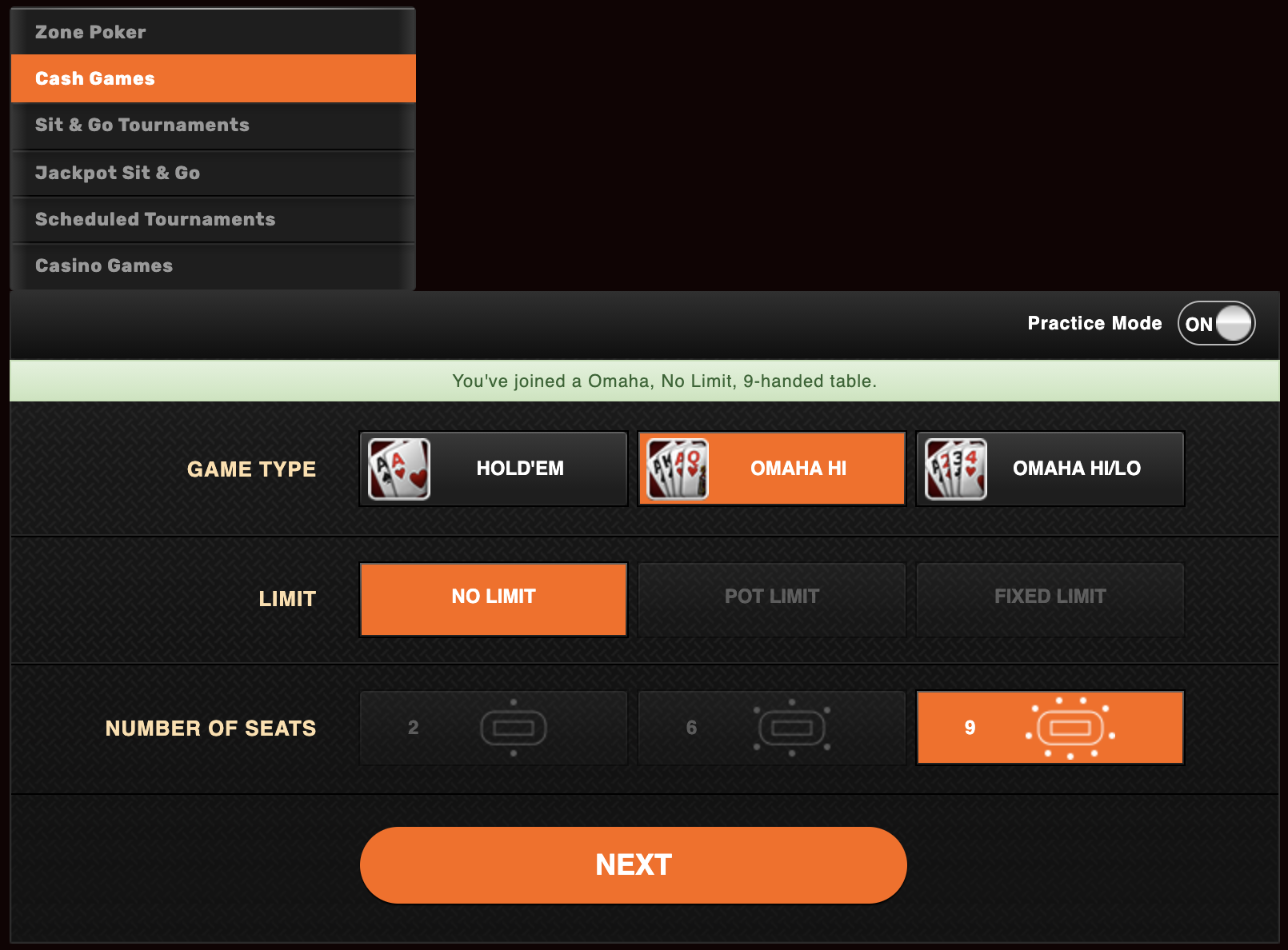 Just click Cash Games and you’ll bring up a screen for selecting your type of poker. Click Omaha Hi in the middle (Hi-Lo we’ll talk about below – it’s another variation where a “bad” low hand splits the pot with a “good” high hand). You also have a choice of limits and seats, which are favorite features included in any Ignition poker review.

Number of seats offers you a choice of playing with another player heads up, at a six-handed game, or at a nine-handed full ring game.

Limit refers to caps on bets and raises.

The Omaha action you pick depends on the mood you’re in. When you want excitement, there’s no replacement for no limit Omaha. When you’d prefer something a bit more relaxing at a measured pace, go for fixed limit. Pot limit Omaha gives you something in between, where action can be decent, but still is capped. 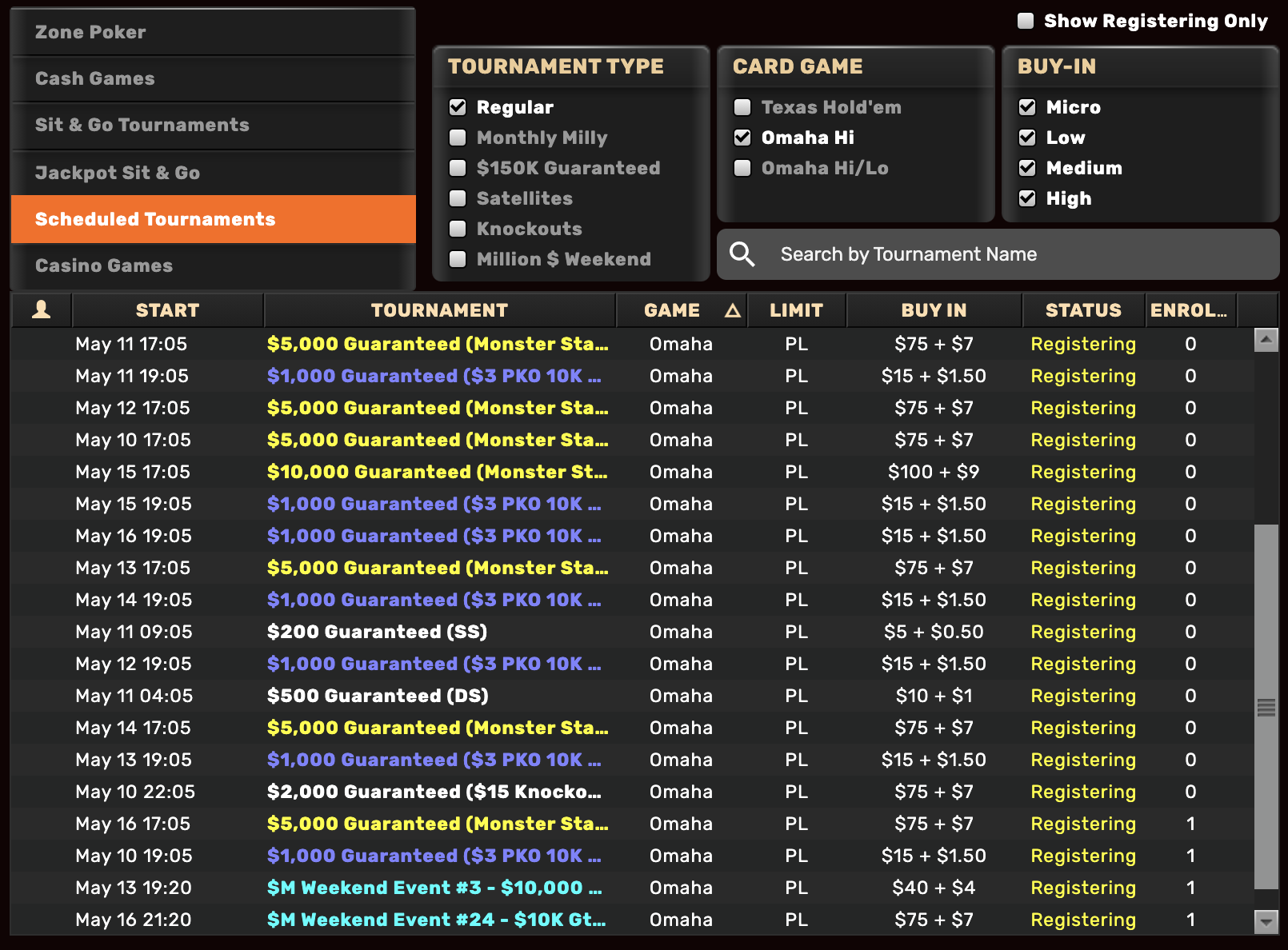 To play Omaha tournaments at Ignition with the biggest prize pools, first select Scheduled Tournaments from the top left box. Then, in the Card Game box at the top right side of the screen, you can select which variation of poker you want to play. Tick off Omaha Hi and leave the others unchecked.

This gives you a full listing of Omaha tournaments coming up at various buy in levels. Some are modest, costing only $10 + $1, while others have bigger buy ins for bigger rewards. In the picture above, for example, you can buy in to Million Dollar Weekend events with $10,000 guaranteed prize pools!

Difference between Omaha and Omaha Hi-Lo

Ignition poker games can get confusing when they have similar names, but it’s not too hard to figure out each variation. The idea behind Omaha Hi-Lo is “What if we paid bad hands, too? Wouldn’t that be fun?”

Ever had a busted draw and wished you could do something with it? That’s what Omaha Hi-Lo is all about.

At the end of a hand of poker, the pot is split 50/50 between the player with the highest hand according to traditional rankings and the player with the “lowest.” The low hand is made with five cards that are 8 or less, with no paired cards. Straights and flushes are disregarded for purposes of the low. This means that the nut low hand is the “wheel:” A-2-3-4-5. The second best would be A-2-3-4-6. The worst low hand is 8-7-6-5-4.

It’s possible to win both the high and low sides of the pot with the wheel!

Ignition cash games are a lot more fun when you’re winning! That takes sharp strategy and practice. To get a feel for things, the first thing you should do is play in practice mode. There’s a toggle switch for it when you’re selecting Cash Games. 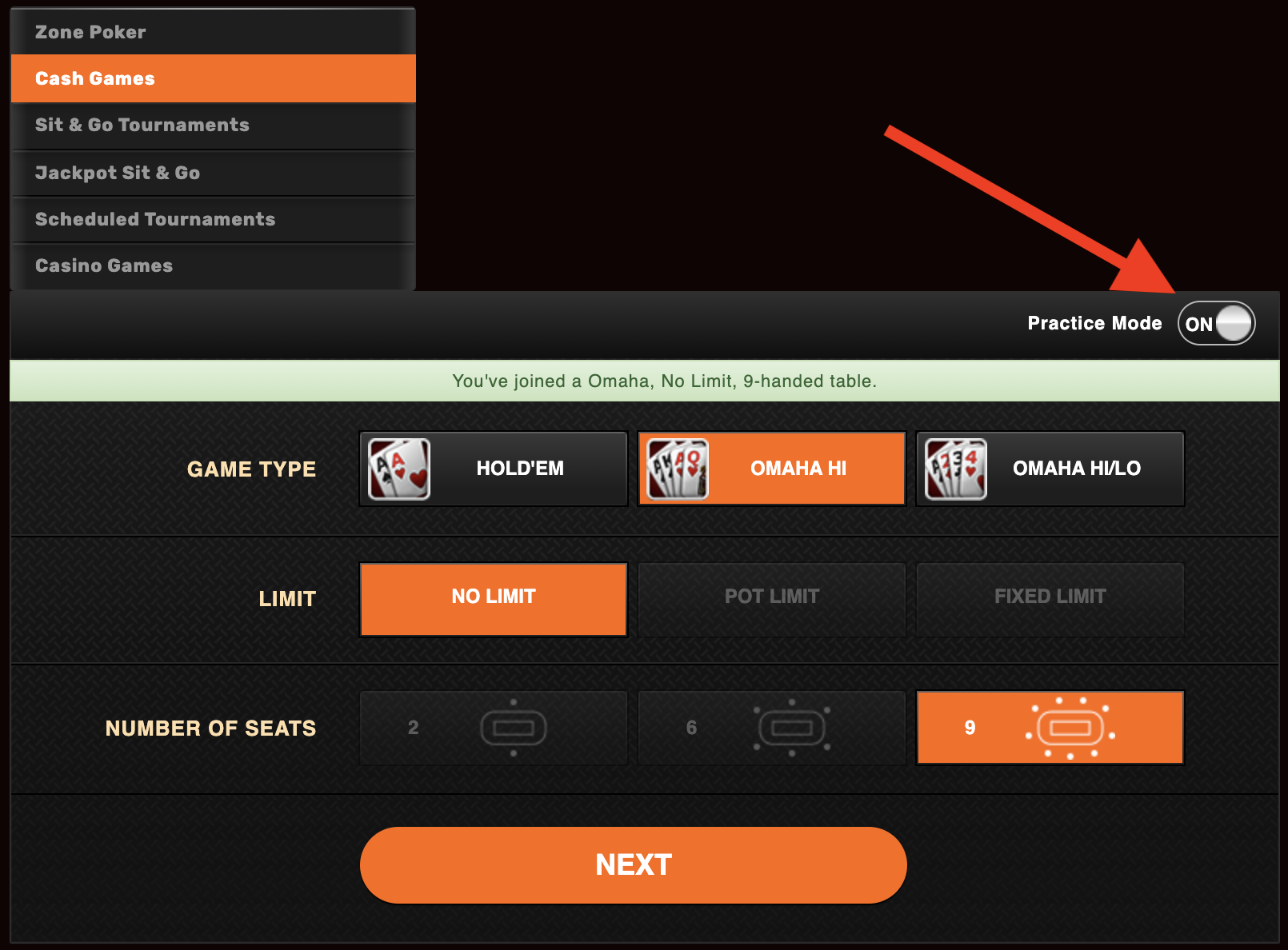 Practice mode lets you play for free using virtual credits. This enables you to get a feel for how to play Omaha without putting any real money at risk. It’s a great way to learn Omaha before you jump into a real game.

The biggest difference from Texas Hold’Em Ignition games is the hands you’ll need to get a win. While top pair with a decent kicker is solid in Hold’Em, you often need more in Omaha. Straights, flushes, and full houses are far more common because players have 9 cards to draw from (four in hand and five community cards). Of course, only five cards can be used at the showdown.

As far as starting hands go, you don’t want to just get dealt four aces. Of course, you’re still happy to see that, but because you can only use two of the cards from your hand, aces and kings or queens are among the best starting hands. Also, big suited Broadway connectors are good like, K-Q-J-T or even J-T-9-8.

Omaha dealers are ready to go.
Find your seat and play Omaha!